A Brief Look at the History of Advertising

So you sell quality products or provide excellent services. Unfortunately, you’re not getting many customers. Are you the problem? Nope. Most likely, people don’t know your brand.

The best way to increase awareness of your brand is through advertising. Small and big businesses utilize almost any form of media to advertise their products or services. According to Statista, advertising spending worldwide is projected to reach $909.30 billion by the end of 2022, with television as the primary medium for advertisers.

Laver in O’Barr broadly describes advertising as a device to arrest a person’s attention and induce them to accept a mutually advantageous exchange. To understand this definition, take the Coca-Cola Company’s “Share a Coke” ad campaign.

In other words, advertising spreads the word about the value potential customers can receive when they buy your products or services.

Advertising and marketing are often mistakenly interchanged. Both terms share a common objective—to entice consumers to purchase your products or services. However, they involve different purposes.

For starters, you should know that advertising is a component of marketing. More specifically, it’s a step in the marketing process.

Marketing refers to preparing your products or services for your chosen marketplace. It involves researching and mining data to identify your target audience’s needs and determine how to meet them.

Meanwhile, advertising is making your products or services known to people within your chosen marketplace. It uses your research and collected data to create compelling promotions.

Contrary to popular belief, advertising is not a novel concept. Rather, it is a practice that has existed for more than 5,000 years. Do you want to learn the history of advertising? Buckle up, and keep reading!

No one knows the exact time when businesses began using advertisments to promote their products or services. Nonetheless, it’s safe to presume that the early form of advertising was word of mouth.

In his book, the Story of Advertising, James Playsted Wood claims that nonverbal advertising has been around for over 5,000 years. The first advertising slogan was written on papyrus and is currently displayed in the British Museum in London as “The Shem of Papyrus”. It appeared in the prosperous city of Thebes and has an interesting story.

Around 3000 BC, a vendor called Hapu ran a clothing factory. He had many slave laborers, including a man named Shem. You can guess that Shem wasn’t happy at work as he escaped from Hapu.

To find Shem, Hapu hoisted up a poster of sorts using a papyrus cloth. At first glance, the oldest ad involved an employer-employee dispute. In it, Hapu asked the citizens of Thebes to help him find Shem and offered a reward for the latter’s capture and return.

Of course, being an entrepreneur, Hapu grabbed the opportunity to promote his business to the public. Shamelessly, Hapu instructed those who could capture Shem to return him to “the shop of Hapu the Weaver, where the best cloth is woven to your desires.”

In case you’re wondering about Shem, he was never caught. Even so, his absence was not a loss for Hapu. Instead, due to the effectiveness of his papyrus campaign, Hapu’s business expanded.

China was the first to use a printed advertising medium. During the Northern Song period (960–1127 AD), Chinese merchants hung printed posters to attract the attention of potential buyers.

In his book, Chinese Business: Landscapes and Strategies, Hong Liu wrote that the earliest identified example of a printed poster from the Northern Song period consisted of a square sheet of paper with a white rabbit logo in the center. The printed poster contained the shop’s name—Quality Needle Shop of Jinan Liu’s Family. It also had th e shop’s slogan: “We buy high quality steel rods and make quality fine needles, to be ready for use at home in no time.” And it had some reminders to identify and remember its logo.

Four hundred years later or in 1439, Europe invented the first mechanical movable printing press. The invention was for commercial book production. However, the books written by artisans contained marketing tricks, like spam and colorful letters to attract clients. 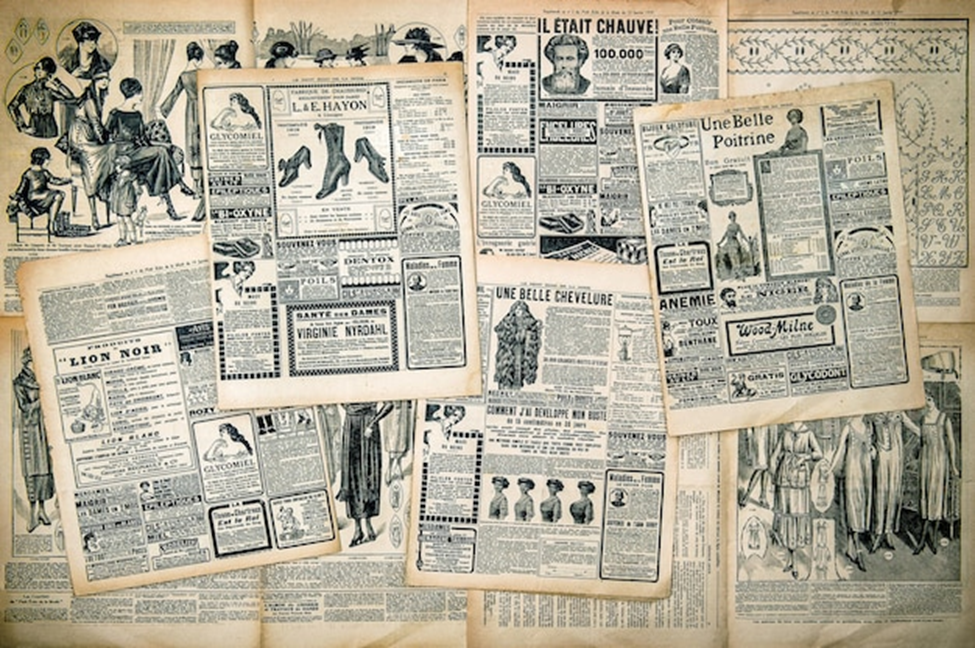 The seventh century marked the advent of the press. Apart from books, people in Europe started to read newspapers. Relation aller Fürnemmen und gedenckwürdigen Historien was the first newspaper issued in 1605 in Strasbourg by Johann Carolus.

Besides print ads, outdoor ads also became prominent in the Industrial Age. The first proper billboards were introduced in the 1830s, which advertised famous circus acts.

Advertising took a whole new turn with the inventions of radios and televisions. In particular, businesses took a more personal and direct approach to promote their products or services.

On August 28, 1922, WEAF, a radio station in New York, aired the first paid radio ad. At that time, direct selling was prohibited. As such, the radio host created his own indirect, direct method in which he talked for ten minutes about living a carefree life in the suburbs at the Hawthorne Court Apartments in Jackson Heights, Queens. In the 1920s, radio stations became the primary advertising medium for businesses.

However, television stations replaced radio stations as the major source for ads after World War II. On July 1, 1941, the US aired the first television ad, which lasted for ten seconds and promoted a Bulova Watch.

The Internet has taken hold of people’s lives all over the globe since the early 2000s. Records show that Internet users grew from 413 million in 2000 to 4.9 billion in 2021.

Businesses took advantage of the growing popularity of Internet usage and began shifting their focus on digital ads. In 1994, HotWired, the first commercial online magazine, launched the first digital banner ads. However, its ads were only static.

In 1996, online advertising was born. DoubleClick was the first online advertising platform to run targeted ad campaigns. It created a software technology that enabled the company to target banner ads to users who visited the network of websites it represented.

Google, founded in 1998, stepped up the game when it introduced Google Ads (formerly known as Google AdWords). Specifically, Google’s software program allowed businesses to target their ads based on users’ Google search history and browsing preferences.

At present, Google has the largest search engine market share worldwide. Thus, investing in Google Ads is necessary if you want a wider reach, but you may need an expert to get positive results.

Apart from Google, businesses can also leverage other digital platforms for their ad placements. Here are some you should consider:

The Hall of Fame in Advertising

The people who changed how advertising is done should also be credited when discussing the history of advertising. Get to know the following people and their corresponding contributions:

Do you remember the first mechanical movable-type printing press developed in Europe? Gutenberg was the inventor. Thanks to him, you don’t have to carve your ad into a woodblock.

You’ve probably heard of Franklin. He is one of the founders of the United States. Another contribution he made was publishing the first magazine that contained an ad.

People often credit the invention of billboards to P.T. Barnum. The truth is that Bell invented the billboards, and Barnum followed suit.

Ogilvy is the father of modern advertising. He developed the concept of branding, a strategy that links the brand with a product to build customer loyalty. Ogilvy also conducted meticulous research into consumer habits to craft successful ad campaigns.

I'm Sophia Jennifer from the United States working in social media marketing It is very graceful work and I'm very interested in this work.

View all posts by Sophia Jennifer
Leave a comment